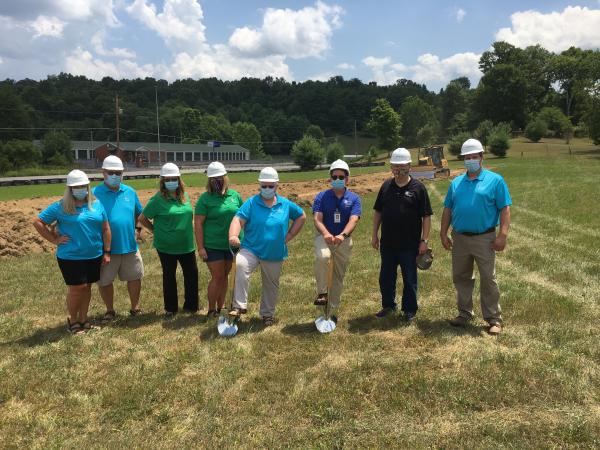 Boyd County Public Library broke ground last Monday on its much anticipated and enhanced new Midland Branch facility off Route 60, across from Summit RV, just outside of Ashland.

The 18,000-square-foot state-of-the-art facility will include many new features and areas for the public to use, such as:

The total space under roof is 19,700-square-feet and also centralizes staff space to include:

“This is an investment in the community and says something about Northeastern Kentucky,” said Michael Campbell, President of the BCPL Board of Trustees, at the board’s June meeting. “I hope it smashes some stereotypes about what kind of community we live in.”

During its meeting in June, the Board of Trustees awarded a contract for construction of the new Midland Branch facility to Trace Creek Construction at $4,304,053, or $200,000 less than original estimates. More than 90 percent of the construction labor will be completed by local subcontractors, which was an important consideration for the project.

The new facility is part of the library’s seven-year strategic plan. Work will begin mid-July and is expected to take about a year to complete. BCPL plans to sell the Summit Branch facility after the Midland Branch opens and will vacate the Kyova Branch upon lease expiration.

“We get to take care of two buildings that are driving us crazy with maintenance issues and put it all together to create a totally wonderful facility for the public to use,” said Library Director Debbie Cosper during the board’s June meeting.

Sherman Carter Barnhart Architects developed plans for the new branch and issued requests for bid for construction. Trace Creek Construction has many years of experience including other library facilities in the state of Kentucky.

“Though the pandemic makes things a bit uncertain, the BCPL Board believes that, in the long run, it makes the most economic sense to take advantage of the extremely low interest rates and competitive market to get started on this project that will serve many generations to come,” Cosper said.

Midland Construction Updates
Back To Top